There has been a large explosion which has destroyed many buildings in Oslo at around 2:30pm (UK time) today (Friday 22/07). Oslo authorities have confirmed that they believe it to have been a, home made, terrorist bomb. There has been confirmed reports of fatalities and injuries whilst report also say that there are still people trapped in some of the buildings. 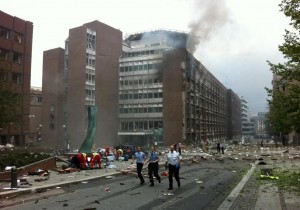 The explosion was close to the Norwegian Prime Minister, Jens Stoltenberg’s, office and the oil ministry building. The blast was heard 10km away and there is speculation  that it was a car bomb.

Whilst no responsibility has be claimed, Norway does not have any known domestic terrorist organisation. Al Qaeda has stated that Norway is a target.

On 8th July three people were arrested in Norway suspected of preparing acts of terror. Prosecutors stated that these plots were concerned with New York (US) and Manchester (UK).