Magnox has taken a major step to ensure prompt payment for small and medium enterprises (SME) by requiring its direct suppliers to adopt its own ‘nett monthly’* payment standards on Magnox related work. 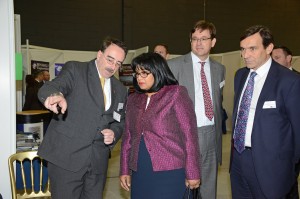 Delays to payment are widely accepted as one of the major problems faced by SMEs. The action, to include Magnox‟s payment terms in all contracts let by its direct suppliers throughout their supply chain, was seen as an early win for the „regional SME steering group‟ established by the Nuclear Decommissioning Authority (NDA) to overcome problems encountered by SMEs working in the nuclear decommissioning industry.

Matt Tuck, Managing Director of Conwy based Matom Limited and Chair of the Welsh regional SME steering group, said: “Late payment is a serious and damaging issue for all SMEs – including those working in the nuclear decommissioning industry.”

He added: “Magnox taking this step of pushing its prompt payment terms into its direct suppliers will be a significant help to the cash flow of the SMEs not just in Wales, but all over the UK.”

Magnox Commercial Director, Dr Peter Walkden, said: “Over half of Magnox‟s annual spend is with the supply chain, so the health and sustainability of organisations in that supply chain – particularly SMEs – is essential to delivering our programme of work.”

The Welsh SME steering group was the first in a series of groups which have been established to support the UK Government aspirations of SME growth. The Government‟s aim is for 20% of the decommissioning industry‟s annual £1.6bn spend to be placed with SMEs.

At a recent NDA supplier event, Baroness Verma, Parliamentary Under-Secretary of State for the Department of Energy & Climate Change highlighted the importance of SMEs to the nuclear decommissioning industry.