Construction work on a structure to cover the reactor building of Fukushima Daiichi 4 has been completed. Equipment to enable used fuel removal will now be installed. 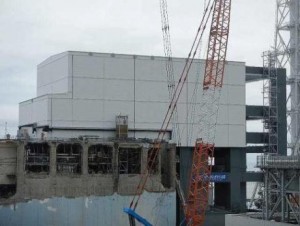 Assembly of the steel framework for the structure, comprising five levels, began in early January and was completed at the end of May. Work to install the exterior wall and roof panels began in early April. The last panel was fitted on 20 July, marking the end of construction work on the cover.

When fully equipped, the new structure will feature ventilation, filtration and handling gear to remove highly radioactive fuel assemblies from the unit’s used fuel pool and place them in canisters for transfer to the plant’s shared storage facility. The ceiling cranes and fuel handling machine have already been put in place within the structure and are being assembled.

Unit 4 was off line for maintenance when the earthquake and tsunami struck on 11 March 2011. Its full core load of fuel, plus used fuel from previous operation, was being stored in a fuel pool at the top of the reactor building. Although this meant there was no possibility of a reactor accident at unit 4, there was a risk of the pool overheating. The stability of the pool was then threatened by major structural damage to the building caused by the ignition of hydrogen that leaked through ventilation systems shared with unit 3.

The removal of fuel from the pool of unit 4 is one of the highest decommissioning priorities at the site.