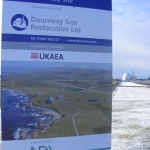 Matom are pleased to announce that we are now supporting the DSRL (Dounreay Site Restoration Limited) programme at Dounreay, Caithness, Scotland as a Tier 2 supplier.  Dounreay was the UK’s centre of fast reactor research and development from 1955 until 1994 and now Scotland’s largest nuclear clean-up and demolition project. This was where some of the nation’s […]

Important benefits derived from the peaceful applications of nuclear technology, milestones in international cooperation on nuclear, radiation, waste, and transport safety; and developments in safeguards and the non-proliferation regime are among highlighs reported by the IAEA in its Annual Report for 2010. The report – published this week and now available online – presents a thematic […]